The former Love Island star took to her Instagram on Monday night to show off the completed space after her sofas arrived.

Molly-Mae, 22, who is currently expecting her first baby with beau Tommy Fury, moved into her huge new home earlier this year.

The couple have been busy renovating and transforming the space, and last night she revealed how everything is falling into place.

Posting two snaps from the living room to her social media, Molly-Mae told her fans, “There was a furniture install today in the house.

“I couldn’t be there, that’s what they call torture, but I can’t wait to see it all when I get home. We have canapes now.” 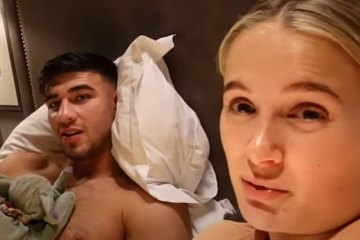 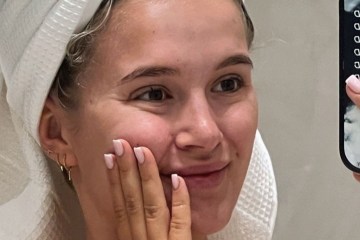 While a second snap revealed her new curved sofas, which appeared to be made of a silky cream material with simple white cushions.

The room – which featured cream carpeting and gray curtains – had been completed with three small wooden coffee tables.

The tables had been neatly decorated with books and cream colored trinkets to match the rest of the room.

“I can’t cope,” Molly-Mae simply concluded of the canapes, alongside crying eye and love heart emojis in the late night post.

It comes after Molly-Mae revealed the “painful” side effect she was experiencing at six months pregnant with her baby girl.

The mum-to-be could be seen showing off her makeup-free face on YouTube as she explained that she’s had ‘skin issues’.

As Tommy leaned over to try and “pop his white head” on camera, she explained that his skin had been “so sore” lately.

“It’s one thing that pregnancy has brought me, it’s skin issues and it’s a first for me because I’ve been really blessed,” she told her fans.

“It’s really painful, like it’s such a pain. Look how big it is guys, it’s so sore and it’s really sore.”

It comes after Molly-Mae revealed she had “really bad stretch marks” and suffered with her body image, six months into her pregnancy.

The reality TV star, who is expecting a baby girl, shared the skincare products she used during her pregnancy to help them.

Molly-Mae and Tommy, 22, revealed they had a gender-revealed daughter inside their home earlier this month.

Posting a happy clip to Instagram showing them covered in pink confetti, Molly wrote, “OUR LITTLE…”

The couple also made their baby announcement on Instagram, with a video featuring Molly saying ‘I can’t wait for the adventures we haven’t even dreamed of yet’ from her final speech during their time on Love. Island in 2019.