THE WASHINGTON POST – When you meet Tropic, a ginger cat from the Bahamas, you don’t immediately think of his orange stripes as design inspiration.

But when it came time for Sara and Peter O’Keefe to choose colors for their Washington dining room with designer Barry Dixon, their rescue cat color felt like a natural place to start. The cat reminds them and their two children of the tropical sunsets and fun times of the 2017 vacation at Lyford Cay in the Bahamas. Now the Terracotta, Pumpkin, and Coral Room does too.

“Tropic is the coolest cat ever and a real person,” Sara said. “It is spreading all around the house. The kids love him.”

In decoration, inspiration is paramount. Yes, you can just throw a bunch of matching furniture and accessories into a room and live there. But if you build a room around a specific treasured object or feeling, you’ll create a place that truly captures your personality.

“A lot of things help tell the story of a room,” said Newton designer Liz Caan. “Typically I try to focus on a feeling and then support that story with personal items a client owns.”

These pieces could include an antique or a favorite piece of art. “Everything we specify, design and collect for a space plays a role and helps support the story and the feeling,” she added. 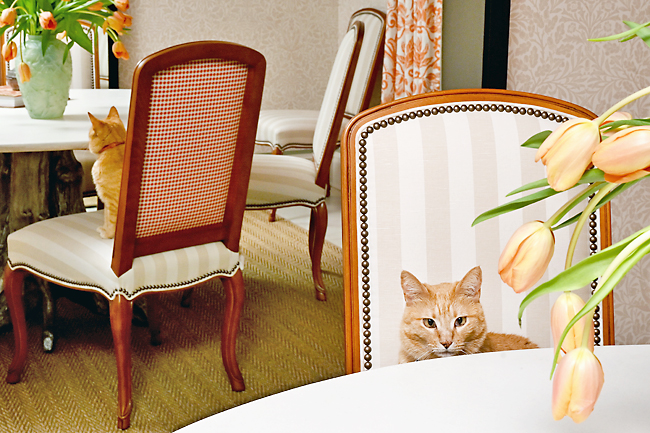 New York designer Alfredo Paredes said it’s important to tell a client “what he dreams of” for a space. He once worked with someone who wanted his cliffside Caribbean beach house to look “like you’ve been in the sun all day and jumped out of the shower and, still with your hair on.” wet, for having put on white shorts”. This idea became a jumping-off point for Paredes’ vision for the place, which he describes as “a beach house in Mykonos where you’re barefoot” and staring at sand and water.

Interior designers can find inspiration in just about anything: museums, travel, fashion, movies – or even Instagram. Some clients show decorators a sentimental element that informs the color scheme, mood or style of a room. It might be the purple and gold of a favorite Minnesota Vikings sweatshirt, a hand-woven textile from a Santa Fe flea market, or the shimmering gray mineral of a valuable collection of gemstones.

Then, of course, there are pets. The wood floors were chosen to match the sandy color of a Labrador; Tropical siestas in a sunny window on a bench upholstered in a suzani-like fabric (Fabricut’s Helike Medallion) embroidered in the colors of his fur.

When Dixon met the O’Keefes, Tropic came to the door to greet him. The chat quickly became part of the space color conversation. “We found lots of colors and textures of the Caribbean sky,” Dixon says, but it was the pungent colors of the cat that really spoke to the family. “We took the colors from the orange tabby and then added pale blue and sea grass,” he said. Dixon wrapped the room’s walls in color and pattern using Morris & Co’s Acorn wallpaper.

He added Chromatic by Phillip Jeffries in opalescent orange to the ceiling.

“When we look at Tropic, we think of the Bahamas,” Sara said. “The dining room is full of that energy.”

A few years ago, Richmond designer Janie Molster saw a flowing pink and red silk dress by Brandon Maxwell online that she had to have.

“It’s one of my favorite color combinations,” Molster said. “It looked like an incredibly comfortable dress that looks elegant but not stuffy.”

It’s the same vibe that Molster cultivates in her renovated 1903 farmhouse in the city’s West End, which she uses as a design testing ground for her decorative work. “My house is constantly changing,” Molster said. “Nothing is ever really finished or done. It’s a permanent laboratory.

She had this dress in mind when putting together bold Moroccan rugs, vintage Murano glass lamps, a bench covered in faux fur and pink paint (Benjamin Moore’s confetti) for her den. The linen-covered Lee sofa is covered in a red and pink suzani-style quilt. Everything is comfortable and durable, as she has five children and four grandchildren, and she loves having friends over.

Looking to her closet for inspiration was a no-brainer for Molster, who often relies on a client’s fashion choices to determine a room’s colors, patterns and textures. She writes about it in her recent book, “House Dressing: Interiors for Colorful Living.”

Using fashion, Molster said, “takes the confusion and intimidation out of people’s design decisions a bit. You make a design decision every day of your life when you take your clothes out of your closet.

“I am drawn to the combination of pink and red. Growing up with a sister, my mother’s take on our color preferences was that I was a pink lover while my sister preferred red,” Molster added. “I remember the day when it occurred to me that I didn’t need to choose. I could have it all.

Molster says she’s still drawn to the lair and it can turn her mood. “When I’m here in this room, it doesn’t matter if it’s really hot or freezing,” she said. “It’s always warm and happy here.”

Hurricane Katrina in 2005 was devastating for designer Penny Francis, owner of New Orleans boutique Eclectic Home. Years later, an unexpected treasure that resurfaced from that painful time became the inspiration for her grandson’s nativity scene.

“My whole family was affected,” she said. “All of our homes have been flooded to some degree.” Her own two-story bungalow, which she shared with her husband and daughters Casi, then 17, and Camryn, then four, took on three feet of water which sat in the house for 10 days .

“With 100% humidity and a temperature of 95 degrees, the house was completely covered in mold and had to be emptied,” Francis said. The girls have lost almost everything in their bedrooms.

After a three-year renovation, the family moved back in. Life went on, Casi got married and just before the pandemic hit, she got pregnant. “It was both a joyful and a scary time,” says Francis. One bright spot was working with her daughter on the design of a nursery. “I wanted it to be a really happy place reminiscent of when she was little,” Francis said.

The inspiration for the bedroom came one day when Francis was cleaning out a closet. A long-forgotten jack-in-the-box his two daughters had been playing with popped out of a storage bin. It was an emotional moment.

“It’s kind of a classic American toy that was a token of my childhood,” said Casi, now Casi St Julian and a decorator herself.

The jack-in-the-box primary colors of the 1980s “got our juices flowing on the nursery color palette,” Casi said. French blue and yellow with touches of green and red became the theme of the room.

Francis found a wallpaper pattern of hot air balloons (Balloons by Schumacher) in the colors of the toy, and she dressed the windows in yellow and white indoor-outdoor fabric (Schumacher’s Blumont Stripe). The baby quilt and the Huppé Adelaide blue rocking chair and ottoman brought it all together.

When the St Julian’s family moved from New Orleans to Texas last year, son Oliver’s bedroom was lovingly recreated, with the jack-in-the-box sitting above a white armoire. “He has a lot of toys now,” Casi says, “but he still likes to play with this one.”

Labyrinth Planting Day at the Ohr O’Keefe Museum of Art